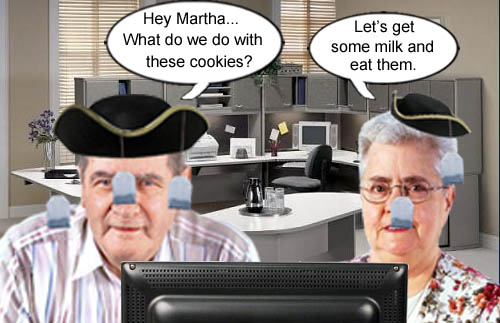 Corporate Sports – A Marriage Made in Hell

One more post with our Sports BS retrospective and the beginning of our Corporate BS retrospective. Well whaddya know…here’s an article from our September 17, 2006 issue that combines BS from the sports world and BS from the corporate world in one convenient article. Who wouldn’t want to work at this company?

G. Terrance Wallace, the Vice President of Technology at software company Conglomeris, located in the Cactus Corners Ocotillo Office Park, recently instituted a novel new program geared at increasing productivity and visibility for his employees as they toil away on a daily basis in their cubicles. Taking a cue from the sports world, the innovative boss has made the cubicles into an arena and has invited people in to watch and cheer on his software engineers as they code and debug programs.

“This is a revolutionary move,” commented Wallace. “Time after time, my programmers complain that they’re working harder than any of those professional athletes and they’re smarter than those athletes but yet they earn decidedly less. Well, I can’t give my programmers a million dollars. That would be ridiculous!” Wallace then chuckled for several minutes and continued. “Seriously, I can’t. But what I can do is increase the appreciation level for their work. Therefore, I’ve built a spectator arena where fans can come and watch these guys work their magic. I’ve built a concession stand where we sell hot dogs and sodas for fans. I’ve given the programmers numbered jerseys, with the Conglomeris logo of course. I’ve managed to coerce Vera and Ruth from Accounting to be cheerleaders. I’ve even printed trading cards with the programmer’s pictures and programming stats on them. We’ve come up with stats like lines written per hour and bug fix quotient; it’s a stat junkie’s wet dream. We’re also in the works for bobbleheads. I predict that this will be the new trend of the future in high tech industry.”

Senior Software Engineer Larry Deaver said, “This is like a dream come true for me. I was never very athletic in school. I was on the chess team, but no one ever came to our matches. But I could code…code like the wind. Now, I’ve got cheerleaders rooting me on with chants like ‘Debug debug go go!’ Nothing motivates you faster than those foxy accounting babes egging you on. I fixed ten Class B bugs and five Class A bugs today. I was as they say ‘en fuego’.” Deaver then pumped his fist and accidentally hit it against his desk. “Ooowwwwieeeeee! Ooowwwwieeeeee! I hurt my mouse hand! Injury time-out! Send in the medic!”

Cheerleader Ruth Rubinowitz said, “Oh this reminds me when I was a wrestling cheerleader in high school; I’m used to cheering at empty arenas. Hey, the boss is giving me an extra dollar an hour to do this gig so I don’t mind. That one programmer with the coke bottle glasses, Dan Schlueter, is kinda cute. Sure he leads the department in introduced software bugs, but he’s due for some bug fixes. C-O-D-E Coooooooode! Yeah!”

Not all the programmers were enthusiastic about the new program. Scott Majewski said, “This is so frigging lame! Look at the cheerleaders. Ruth and Vera both got to be in their late forties.  I’m sorry, baggy sweats just aren’t sexy or motivating. The stands are empty. The hot dogs are staler than the ones at Kwik-n-Easy. The only reason Wallace is doing this is to get on the cover of TechNews. Terry’s a complete egomaniac. Not only that, he’s a bonehead. He wouldn’t know good code if it bit him on the ass. He doesn’t care about good programming practices, he just wants software ready for demos so he looks good to headquarters and to do that, he’s got to push us like sled dogs with gimmicky tricks like this heap of dog dung.”

Since the arena was opened one month ago, only two people have showed up to watch the programmers; one was a man who was waiting for a bus and had an hour to kill, the other was a homeless man who wandered in for a hot dog, but soon after eating it, became sick and left.

But Wallace is determined his vision will ultimately succeed. “Oh this will work,” said Wallace confidently. “If the programmers don’t want their jobs to go to India next year, they’ll produce and I’ll be named Executive of the Year by TechNews.” He then laughed maniacally and rubbed his hands together.