We’re taking another brief interlude from our coverage of whack job Arizona GOP candidates to post about the absolutely unscrupulous and feckless U.S. District Court Judge Aileen Cannon, who was confirmed in the waning days of the Trump administration and nominated by the twice impeached megalomaniac man child himself and is also a member of the right wing conservative Federalist Society.

It appears that Cannon is staying loyal to her master by agreeing that a special master be chosen to review the classified documents retrieved by the FBI at TFG’s palatial estate Mar-a-lago in August which is precisely what Trump wanted. Then she appointed Raymond Dearie as the special master who is also one of the judges Trump wanted. Hmmmmm. See a pattern here? Can you say corrupt? Both Democrats and Republicans say that Dearle is honorable and above reproach so we’ll wait and see what happens in the coming weeks. But given that Trump always seems to get his way, we’re incredibly skeptical that justice will prevail.

Anyway judicial pundits have jumped all over Cannon and her fealty to her special master Trump essentially granting him the delay he wanted. These are ultra classified documents that Trump should not have. Those documents belong to the people of the United States not Donald Trump. Doesn’t the national security of 332 million Americans come before Trump’s reputation or feelings? Apparently not, as Cannon, in her briefing, basically stated that the reputation of TFG is paramount and that she doesn’t believe the FBI and the DOJ when they say the documents were classified. The FBI took pictures of the documents! They were classified! This is not a witch hunt! Trump took classified documents and his appointed lackey judge is trying to cover it up. Judge Cannon is utterly corrupt! She should be removed from office and barred from practicing law in the United States! Maybe she could move to Russia? Putin could use a good sycophant to support his crimes these days.

Words can’t express the glee we’ve had this week with the news of the FBI issuing a search warrant at TFG’s palatial residence Mar-a-lago in Florida. With unsealing of the warrant today, we’ve learned that the twice impeached orange haired megalomaniac man child is under investigation for possible violating of the Espionage Act. We’ve been critical of Merrick Garland and the DOJ for seemingly doing nothing to bring the former CEO/Dictator to justice but we stand corrected. Garland has handled everything masterfully this week and we’ve got a huge case of schadenfreude, just like at least 81 million other Americans.

In celebration of TFG finally appearing to face some justice, we’ve decided to repost a photo-toon from December 8, 2019. It depicts what a possible Trump Memorial might look like showing TFG sitting on his favorite throne dictating to his followers on Twitter, explaining COVFEFE and stating that we should all get over the fact that he’s a crook. At least we know now why he was obsessed with toilets flushing – that’s where he tried to put his torn up documents. Let this be the crime that puts him in a jail cell with a guy named Bubba who’s fond of spoonin’.

Recently, it was reported that a sinkhole had opened up on the White House’s North Lawn and it appears to be growing. Wow! If this isn’t a perfect metaphor for the Trump administration, we don’t know what is.

So how did the White House deal with the problem. Ehhh…just put a board over it. Just like with climate change; nothing to see here folks. Apparently, this isn’t the first sinkhole to appear on a Trump property. According to the aforementioned link, one opened up at Mar-a-lago last year.

We have no doubt that America’s hugely intelligent CEO/Dictator, Donald Trump, will probably wonder if the sinkhole is in fact his ass. 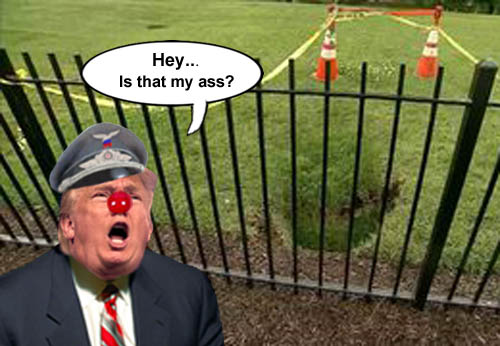 America’s CEO/Dictator, Donald Trump, ponders whether or not the sinkhole on the White House lawn is indeed his ass.

We’ve introduced a new segment here called Twitty Trump Tweets to explore in depth, our American CEO/Dictator’s penchant for tweeting like a petulant teenager instead of acting like a world leader.

America’s CEO Donald Trump has made headlines recently by spending more money in just one month traveling to play golf at his course at Mar-a-lago than Obama spent in a year. So he’s played golf 13 times already…and this from a man who criticized Obama for playing too much golf. Yes folks, Trump’s making America great again, 18 holes at a time.

America’s CEO/Dictator, Donald Trump, who is also a huge duffer, is making America great again 18 holes at a time.