The Master Bait And Switcher

One of the most astonishing things about Con-a-thon 2016 that we just can’t believe was that so many old, white Teabagger patriots voted for Donald Trump and voted to keep a Republican majority in Congress. Although he claims that he won’t cut Social Security and Medicare (like we can believe anything he says) conservative Republicans have wanted to cut Social Security and Medicare since their inception and privatize everything. In ‘bidness’ terms, it’s called the old bait and switch. Yes, CONservative Republicans ‘compassionately’ want humans to suffer and die in horrible ways in their old age like in the good old days before the Great Depression when robber barons could work you more than eight hours a day, often for seven days a week and children didn’t waste precious energy playing, they worked for pennies a day. Does anybody honestly think Donald Trump would side with poor people instead of his fellow billionaires? It’s all about greed and making more money, more money, MORE MONEY.  He’s already stocking his cabinet with billionaires and corporatists. Why would so many low income people vote against their own interests and elect someone who will destroy their lives by getting rid of their safety net that enables them to live? Oh yeah…that’s right…Hillary Clinton used a private email server like Colin Powell, Condoleezza Rice and the George W. Bush White House did. 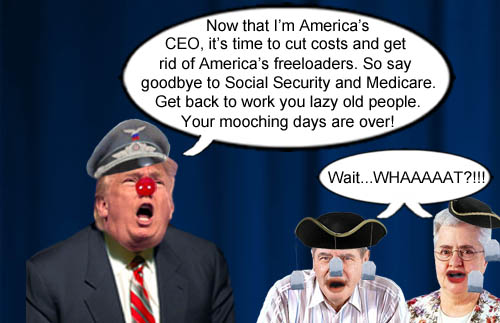