Continuing with our ‘something completely different – get me the hell out of the nightmare year that is 2020’ photo-toon retrospective. . .

Remember when the craziest thing about the Republican party was Ms. Ubetcha, Sarah Palin? Fun times! The Queen of Wasilla certainly made quite a ruckus when she published her book Going Rogue. Oh right. . . late Senator John McCain also chose her as his Vice Presidential candidate in 2008, which resulted in the rise of the Teabaggers in 2010. Ooops!!! Yeah, we never forgave McCain for that one.

Here’s a photo-toon from our October 28, 2008 issue featuring a certain beloved cartoon character moose who has fallen victim to a certain rogue hunter.

Much is being said about Donald Trump’s upcoming inauguration as the 45th President of the United States and the lack of star power he has so far attracted to the event. Much like the GOP convention, it looks like there will be a dearth of A-list entertainment options despite claims to the contrary by Trump and all his pals. About the only celebrities willing to perform are Kid Rock and Ted Nugent. We’re also sure Scott Baio is probably available. Maybe he could play some songs off of his albums. Actually, Alec Baldwin, who has been comically portraying Trump on SNL, has offered to perform at the inauguration if he can sing AC/DC’s Highway to Hell.

We think that maybe Trump will have to turn to the animal kingdom for performers. Maybe some YouTube cats, or some drum playing hound or maybe a piano playing squirrel. Yeah, that’s the ticket. 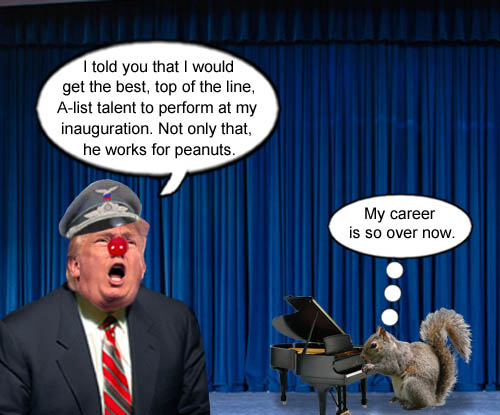 Donald Trump is attracting top notch, A-List entertainers to perform at his inauguration like Nutsy, the piano playing squirrel.