The March for Science happened on Earth Day, April 22nd, 2017 in cities across the globe. Tens of thousands of people showed up to give support to science, which is under attack in this country by the Trump administration and right wing zealots in the Republican party. Vital government programs face devastating budget cuts because the facts that scientists discover don’t match the narrow ideology of the people who control the Republicans; the oil, gas, coal, defense, finance and banking industries and the evangelical christians.

We here at the Bucket attended the satellite march in downtown Phoenix. According to the facebook page, about 3.3k people attended. Many scientists and science enthusiasts showed up to support logic, reason and the scientific method. Although it was billed as a not partisan event, almost all of the people there were ROYALLY PISSED at the Trump administration and the Republicans in general. There were many greats signs at the rally, too. Our favorite was one carried by a local lady, which featured a picture of Donald Trump next to the words – Does this ass make my country look small? Classic!

But despite the frustration and anger of the participants, it was a peaceful rally. It gave us some hope that maybe, just maybe something will be done about these charlatans, con artists and corporate lackeys who are running the government now. Like another sign said – So bad, introverts are here…yes, even the smart, intelligent, geeky, introverted scientists and engineers, the very foundation of this country, are willing to venture outside their comfort zones and socialize to try and put an end to this mess. 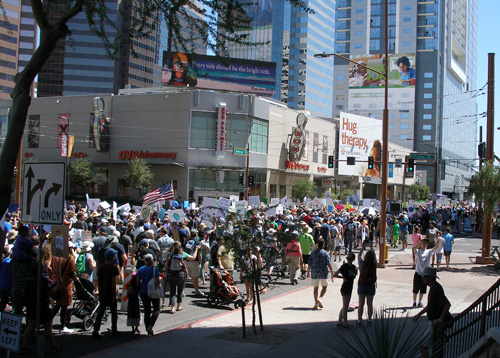 A small section of the marchers in the Phoenix March for Science on Earth Day, April 22, 2017 in downtown Phoenix, Arizona. BilgeBucket Gazette staff member, Chester Einstein, is the one in the hat carrying a sign.

We’ve stated on this site ad infinitum how anti-science the Republicans have become in the past twenty years. Donald Trump has even put a climate change denier as head of the EPA and his secretary of state is a former CEO of Exxon Mobil. They dispute any scientific evidence for climate change (and there’s a ton of it) while pushing hard for forwarding the agenda of the oil, gas and coal industries.

Well, this weekend is a chance to take a stand and tell the Trump and the Republicans to shape up. On Earth Day, April 22nd, there will be worldwide marches to promote Science. If you’re a fan of logic, reason and the scientific method, go to a march in your area. Science Rules! 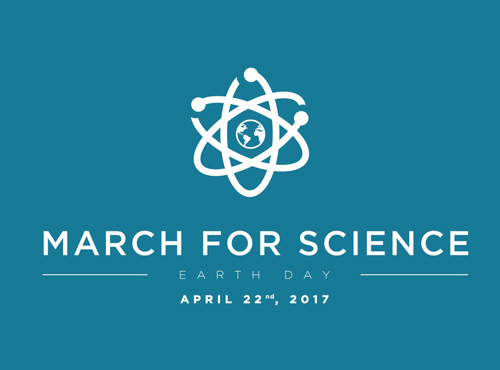