The Vice Presidential debate was last night and as predicted is was pretty lackluster. What kills us is that many ‘pundits’ think Pence won the debate because he merely denied that Donald Trump said all the horrible, rotten, despicable things he has actually said during the course of the last year of this clusterf*ck that is Con-a-thon 2016. Since when did lying your ass off win you a debate? Oh that’s right, he’s Republican and the corporate news media is conservative. Hell, Republicans were claiming victory two hours ahead of the debate.

However, the Clinton campaign has released a pretty damning video showing the dishonesty and deception of Mike Pence and the Trump campaign. If Puritan Pence keeps lying like Pinocchio, he’ll severely jeopardize his chances of entering into his christian heaven. 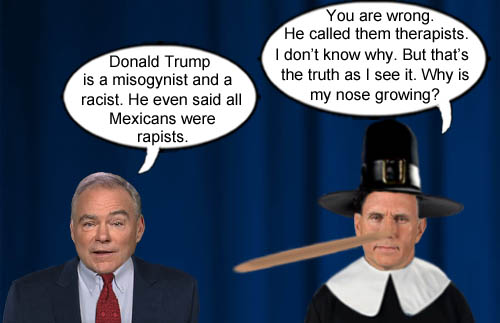 GOP Vice Presidential candidate and modern day Puritan, Mike Pence, spins some Pinocchio-like deception and dishonesty which may hinder his chances of getting into christian heaven.