It was just announced that none other than ol’ Dubya, George W. Bush, has come out of retirement to help GOP Senators who are having trouble with their failing campaigns this fall because of the toxicity of the Republican nominee for President, Donald Trump. Isn’t that like calling in an arsonist to put out a fire? It’s amazing that just ten years ago, most sane Americans were thinking the Republican party couldn’t get much worse than good ol’ Dubya and the Bush administration. For those of you with anemic memories who actually have forgotten how horrible George W. Bush was, here’s a short list and a longer list to remind you that he’s the worst President since Herbert Hoover. 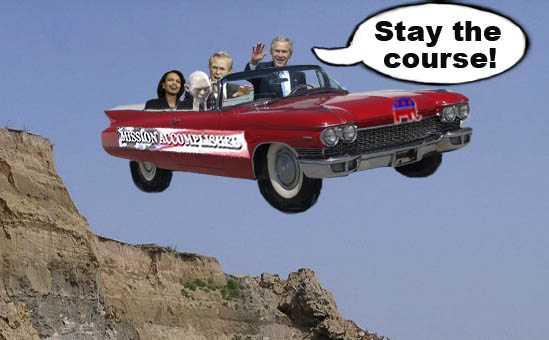 President Bush shouts his mantra while joyriding his Republican made vehicle, America, off a cliff with Vice President Cheney, Secretary of State Rice and Secretary of Defense Rumsfeld.