We’re still shaking our heads at the stupidity of the MÆGAMorons or Teabaggers 2.0 and their insipid open up the country protests, despite the still rising number of cases of COVID-19 across the country and the world. The reason: they miss getting haircuts and manicures. These idiots, who’ve prided themselves that they collected enough rations to survive for years in the coming apocalypse, can’t make it a month on moderate social distancing. This shutdown isn’t to take away our freedoms; it’s for the safety of all Americans so we don’t get this nasty disease which currently has a 7 percent death rate worldwide. Like we stated in our previous post, should we protest when the weather service issues a tornado warning. It’s almost hurricane season; should we just ignore hurricane warnings because they infringe upon our freedoms for a while. This shutdown isn’t permanent, folks. If we can keep a lid on things until June, there’s a good chance the second wave, which will be coming, won’t be quite so bad.

But nooooooooo! States like Georgia and Michigan have already started to open things up. People flocked to beaches in southern California. We just hope that if these people do get sick, they won’t bother to go to the hospital. Just let your local Republican know that you gave your life for the economy and we’ll sure they’ll remember your sacrifice.

America’s CEO/Dictator Donald Trump just returned from a trip across the pond and to hear our man-baby-in-chief talk about it, it was a smashing success. Of course, the truth is somewhat different. As usual, Trump made many gaffes and ridiculous claims. He even had time to trash Bette Midler on Twitter, the platform of twits. The orange haired megalomaniac looked like Al Bundy in his tuxedo at a formal dinner. But probably the most egregious is the utter delusion he had of his own popularity. There were thousands who came out and protested Trump, complete with the Trump baby balloon, which accurately depicts our petulant toddler in all his diapered glory. But Trump said that they weren’t protesters; they were ‘fake news’.

We also have no doubt that with Trump’s colossal ego, he somehow thought D-day meant Donald’s Day and that everyone in the world was there to celebrate all the glory and wonder that is Donald Trump. As we’ve noted before, to think that in the span of fifty years, the Republican party has gone from a true hero in Dwight D. Eisenhower, to a world leader pretend like Donald Trump is nauseating, excruciating and revolting. 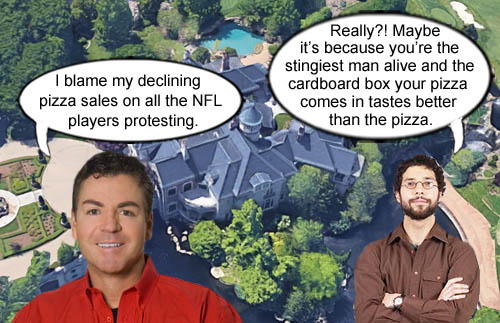