Paul Manafort is the latest former associate of Donald Trump to flip and it has many speculating as to whether this is the beginning of the end for the orange haired man child who is America’s CEO/Dictator. Most people agree that things aren’t looking good for Trump, but then again things have never looked good for the Donald during his entire disastrous presidency and yet he is still — unfrickingbelievably — president.

This whole clusterf*cked trauma brings to mind for us old farts here at the Bucket, the early 1960s crime drama The Untouchables starring Robert Stack as Eliot Ness, which has been constantly played in syndication on TV for the last fifty years. In the episodes, Ness and his band of incorruptible G-men pursued noted criminal gangsters like Dutch Schultz, Frank Nitti and the kingpin, Al Capone.  The lead-in and ending graphic for the show was very stylistic and combined with the iconic theme music, set the mood perfectly for the drama. We can just imagine a possible reality reboot of the show with Robert Mueller leading his intrepid team of FBI agents as they descend on Trump Tower to bring to justice members of the Republican crime syndicate like Manafort, Michael Cohen and of course, the dear leader, the real Alphonse Capone of the 21st century, Donald Trump. 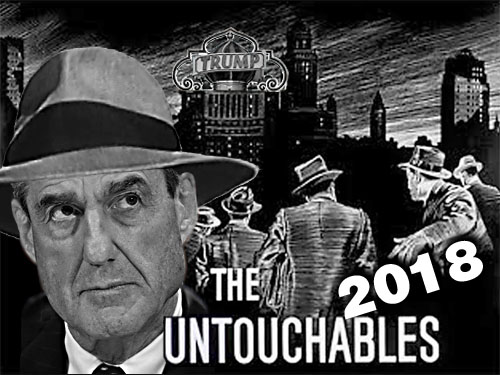 A reality reboot of the fantastic early 1960s crime drama. The Untouchables, is in the works with Robert Mueller leading his intrepid squad of FBI agents as they descend upon Trump Tower trying to bring to justice members of the current Republican crime syndicate like Paul Manafort, Michael Cohen and dear leader, Donald Trump.