The Perfidious Plot of Puritan Pence

Vice President and modern day Puritan, Mike Pence, recently grabbed headlines away from Donald Trump, which isn’t easy to do nowadays. First, Pence cast the deciding vote on a bill which paves the way for defunding Planned Parenthood. Donald Trump just signed it into law. Pence is a full fledged evangelical zealot, whose religious intentions seem to be taking America back to the seventeenth century. This bill is an affront to women everywhere, but that doesn’t seem to matter to conservative christian males, who still base their views of women on the antiquated views postulated in the bible. The picture of the people (all white males) who decided women’s healthcare, which has become viral, shows that these troglodytes view women as mere possessions, who should only do household chores, have babies and shut up.

The second incident has to do with an interview Pence did back in the 2002 where he stated that he would never have dinner alone with a woman who wasn’t his wife. While many in the corporate news media defended Pence, claiming how gallant and gentlemanly this is, we here at the Bucket tend to think otherwise. We haven’t come to our atheism and our aversion to evangelical christians without experience. This is blatantly about Pence not wanting to tempt himself, which the article linked to above, addresses. There are many christians who are so sexually repressed that they can’t even say the words vagina or penis without turning twenty shades of crimson and dying of embarrassment. In their minds, sex or anything having to do with sex should not be discussed and any kind of modern thinking on contraception and birth control is wrong.

What makes Pence so dangerous is that compared to Trump, he seems reasonable. He’s becoming normalized by the media and he’s anything but normal. He is a right wing, radical, christian zealot. If he has his way, women’s rights, will be turned back a generation…or more.  We wouldn’t be surprised if Puritan Pence resurrects public shaming of women who have had an abortion or may even want an abortion; akin to making Puritan women wear a scarlet letter on their frocks. Behind that genteel smile, is a perfidious plot to take away women’s rights and return them to the kitchen, barefoot, pregnant and silent. 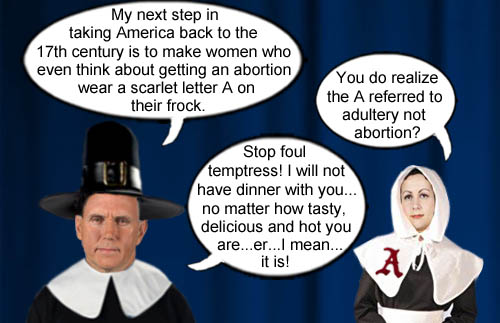 Vice President and modern day Puritan, Mike Pence, who is boldly trying to return America to the 17th century, courageously turns down a dinner invitation from a foul temptress who may or may not have had an abortion.