America’s CEO/Dictator Donald Trump gave a ‘rally’ speech Tuesday night here in Phoenix, Arizona which drew thousands of protesters despite the 107 degree heat. Inside the rally, an unhinged Trump ranted about how victimized he was by the press while conveniently forgetting his claim of there being ‘fine Nazis’ and both sides being at fault at Charlottesville. He again blamed everything again on the media because that’s what conservatives do: they never take responsibility for their actions and always blame somebody else because in the conservative mindset, they never make mistakes.

Once again, Trump exaggerated the crowd size just like he did in July 2015 and certainly the local media, which has a strong Republican bias, did their part to build up the crowd size, which thinned out as the night wore on. Trump supporters even posted false photos of the crowd size as real photos and videos showed the room half empty.

We have no doubt in Trump’s media addled mind that when he’s speaking of ‘fine Nazis’, he’s thinking of Sgt. Schultz from the 60s sitcom Hogan’s Heroes. Who knows, Trump may even name Schultz to be the new press secretary. 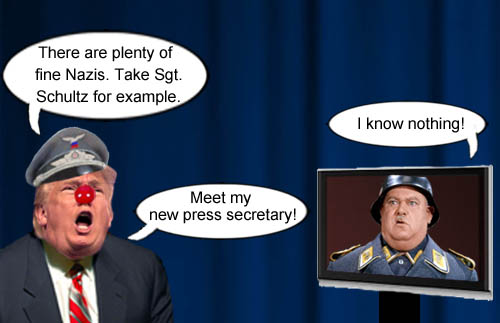 Rumor has it that American CEO/Dictator Donald Trump, will name ‘one fine Nazi’, Sergeant Schultz, as his new press secretary.