The big news over the weekend has been the ouster of chief strategist and Neo-Nazi, Steve Bannon, from the White House. There’s speculation from all sides on what this will mean to an already turbulent Trump administration.

But a simple action by Trump today clearly illustrates what Donald Trump is about. Defying all advise, he stared directly at the sun during the solar eclipse because…well…he’s Donald Trump, King of the World. Nothing can defy him, not even a bigger bag of gas. But don’t worry folks. It won’t hurt his eyesight. He’s blind already…to so many things. 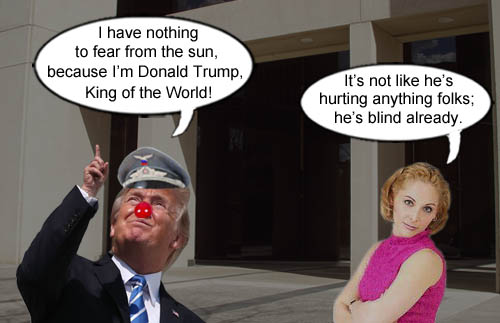 American CEO/Dictator Donald Trump, ever the rebel, defies that tyrant the sun and stares directly at the solar eclipse.