Back in 2006, when the Bush administration took a thumping in the November elections, we were of the opinion that there would never be a White House as screwed up as Bush’s. We were wrong. To say the Trump White House is chaotic is as obvious as saying the sun is hot. Every damn day, something new is being mucked up.

Last week, in an effort to dispose of leaks in the Trump White House, America’s CEO/Dictator hired Antony Scaramucci, an up and coming financier and entrepreneur who promised to rid the White House of spies and leakers.  Scaramucci, or the Mooch as he likes to be called, promptly gave a profanity laden tirade against the leakers saying Reince Priebus was a “f*cking paranoid schizophrenic” and Steve Bannon likes to “suck his own c*ck”. He and Trump then promptly fired everyone’s favorite whipping boy, chief of staff, Reince Priebus.  Then Priebus showed what a sycophantic putz he was by saying “I’m always going to be a Trump fan. I’m on Team Trump, and I look forward to helping him achieve his goals and his agenda for the American people.” Geez! What an idiot!

Well, it turns out that the new chief of staff, John Kelly, doesn’t really like the Mooch, so guess what? Ol’ Moocher is gone. Wow! And we thought Michael Flynn’s tenure was short. Apparently, John Kelly, who is a former Marine general, is a bit of an authoritarian. So he’ll fit in just fine with Trump’s authoritarian regime. Will Kelly be an effective ringleader of this multi-ring clusterf*ck circus that is the Trump administration? Now we think Kelly is by far, a better choice than Priebus, but based on the six months of stunning ineptitude displayed so far, we’re kind of skeptical. 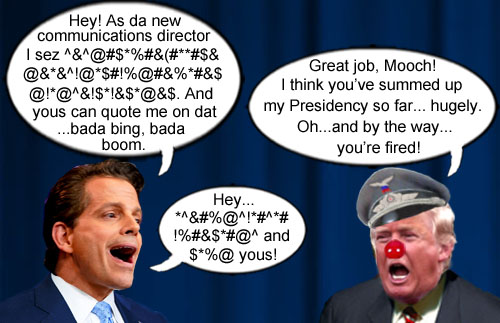