Things haven’t been going well for America’s CEO/Dictator Donald Trump lately. Special Prosecutor Robert Mueller has been pushing forth on the Russia investigation and has impaneled a grand jury, which may or may not indicate an indictment is near. Not only that, Trump’s approval ratings continue to drop. So, as it so often goes when things go south for world leaders and they need a distraction, the one thing that can change everything around in a hurry is a war. And Trump has a very convenient obnoxious opponent waiting in the wings to give Trump a boost.

Kim Jong Un has been saber rattling…or shall we say…missile rattling ever since he came to power in 2011. He tried to rattle Obama, but failed. But Trump has a man-child mentality exactly like Kim Jong Un does (which is why Jong-Un supported Trump for President). When the North Korean leader started boasting that he was going to hit the United States, instead of a calm, even, adult response, Trump acted like any eighth grader would and stoked the nuclear fires with promises of ‘fire and fury’. Then Kim Jong Un responded by threatening to hit Guam, which is a U.S. territory in the Pacific Ocean.

So now it’s game on, much to the horror of every living thing on this planet. The two most infantile leaders on Earth have exchanged barbs over who has the biggest missiles. Now every nation on edge thanks to the little boy in North Korea with a bad hair cut, who wants to prove what a manly man he is by picking a fight with the most powerful country in the world, whose leader is an unstable megalomaniac, who openly wondered why we didn’t use nuclear weapons. We just hope the subject doesn’t change to who has the wackiest hair; then it’s game over. 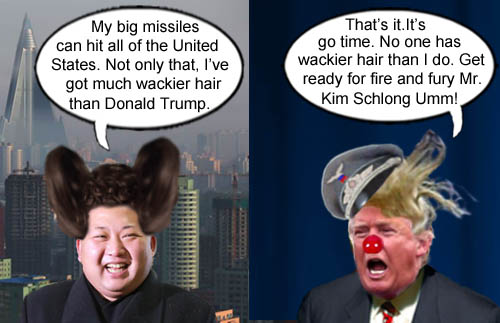 The two most infantile leaders in the world, North Korea’s Kim Jong Un and America’s CEO/Dictator Donald Trump, have decided to start a nuclear war over who has the wackiest hair because…you know…they’re insane.