Since Donald Trump has ascended as America’s CEO/Dictator, we’ve noticed several things happening in the main stream media. One of the most obvious moves is the hiring of former Fox News personnel by main stream corporate media outlets. MSNBC has hired not only former Fox ‘journalist’ Greta Van Sustern but also Megyn Kelly. For those of you with the gnat like memory of Jefferson Beauregard Sessions III, we’ll briefly recap Megyn Kelly’s rise to fame as the most palatable conservative ‘journalist’.

She made a name for herself during the 2016 Presidential campaign by drawing the ire of Donald Trump. This was of course political theater; the Republicans doing a typical good cop-bad cop routine trying to show that Republicans are capable of harshly questioning other Republicans. Megyn played her part very well and for that she was rewarded with a job at MSNBC, where she now has been given a primo spot during NBC’s prime time where she gets to interview top news makers of the the day – and by news makers we mean top conservative news makers of the day. She recently did a much ballyhooed interview with Russian president Vladimir Putin. Last week she did an interview with right wing wack job and Donald Trump chum, Alex Jones. Why is Megyn doing these interviews? One simple, obvious, transparent reason; to make conservative, right wing, authoritarian fascism more palatable to the American public.

In an encouraging piece of news, her ratings have been abysmal. But we don’t doubt that she will soon have President Trump on to boost her ratings. Together they will make America embrace fascism whether they like it or not. 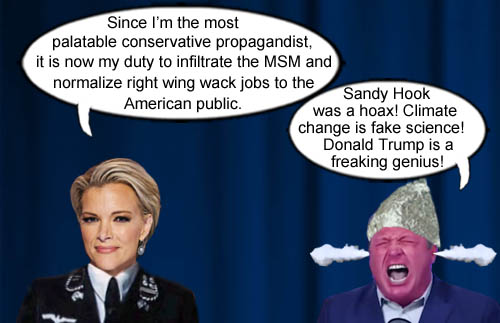