Hurricane Sandy socked the northeastern United States this week killing 30 people and causing between $20 to $60 billion dollars in damage. President Obama and FEMA were right there immediately to offer assistance to the stricken states, even earning praise from Republican governors Chris Christie of New Jersey and Bob McDonnell of Virginia. This is in sharp contrast to the anemic Bush administration response to the Gulf states in the aftermath of Hurricane Katrina. In a stunning display of stupidity, former FEMA head Michael “Heckuva Job” Brown said President Obama responded too quickly. What an ASS! And speaking of asses, GOP candidate, Spiff Romney, deflected 14 questions from the press about his earlier statements about abolishing FEMA if he were President. This of course would enable all those Republican disaster capitalists to swoop in and make a bundle every time a natural disaster hit. We think the Republicans should change their party logo from an elephant to a vulture. 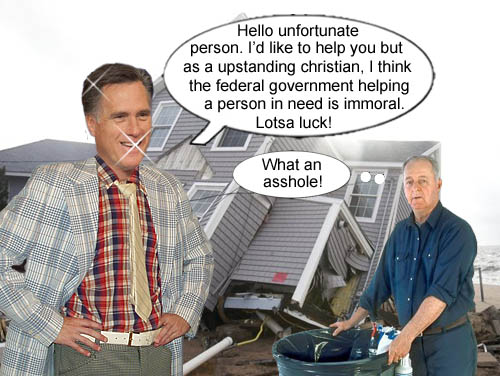 GOP candidate, Spiff Romney, explains to a victim of Hurricane Sandy how the federal government should work in a christian nation.