In one of the strangest events in the Trump administration so far (and that’s saying a lot), this past week, America’s CEO/Dictator, Donald Trump, held a praise-a-thon of sorts where his cabinet members gathered not to discuss policy; not to discuss world or domestic affairs; but to lavish praise and worship upon their illustrious leader. In something out of the Roman Empire, Nazi Germany, Soviet Russia, North Korea or any other authoritarian state, adult men and women actually had to kiss the gigantic ass and stroke the colossal ego of Donald Trump.

Folks, this is not normal in a functioning representative democracy. We can’t remember any cabinet of any recent president, even doofus extraordinaire, George W. Bush, meeting just to lavish praise upon him like he was Julius Caesar. These are the actions of radical, authoritarians who want freedom and justice for only the rich, holy and the powerful; or in other words the Holy Corporate Empire. 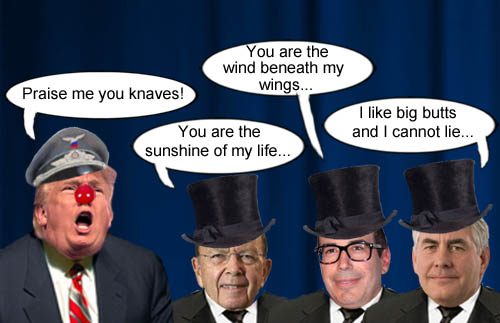 Members of American CEO/Dictator Donald Trump’s cabinet meet to kiss the massive ass and stroke the gigantic ego of The Leader.