We Don’t Need No Stinkin’ Wall

Trump is closing in on the 100 day mark with very little to show for it. Other than his placement of Neil Gorsuch on the Supreme Court (which has more to do with Turtle Boy Mitch McConnell and his fellow Senate Republicans using the nuclear option), he’s done nothing more than bomb Syria and bomb Afghanistan and those were done mostly to distract people’s attention away from the investigation into his ties with Russia during the 2016 election and give boners to journalists like Brian Williams and Fareed Zakaria.

Well, there’s been a clamoring recently about what Trumpty Dumpty plans to do with his promised wall, which he promised would be a done deal by now. The truth is the wall isn’t needed, most people don’t want it and it would be a massive waste of taxpayers money, much like Trump’s repeated trips to his posh, opulent Florida resort, Mar-a-lago, so he can play golf. During the Obama administration, illegal immigration declined (1 million unauthorized immigrants returned to Mexico) and will continue to go down (illegal crossing down 40% in Trump’s first month) because the United States has the biggest, most dangerous doofus, outside of North Korea, in charge of the country. The only deterrent we need is plastering the Donald’s face on welcome billboards at the border with some of his delightful words of wisdom and nobody in their right mind would want to come into this country. Hell, we don’t even want to stay in this country with the orange rage monster at the helm. So we say, we don’t need no stinkin’ wall. 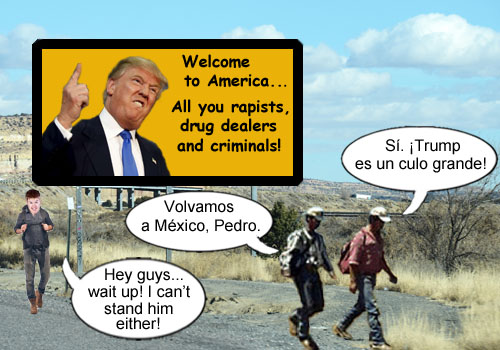 Instead of building an unnecessary, expensive border wall, the United States has decided to implement a much more cost effective way of reducing illegal immigration and increasing emigration.