Rewind: Night At The Foxbury

Bill O’Reilly, the man whose only goal in life is to look out for you, recently got the axe from Fox News, a.k.a. the Republican Propaganda Network because he’s finally harassed too many women in the workplace. It started several weeks ago when women came forward claiming sexual harassment from O’Reilly, who has a history of treating women rather shoddily. Who can forget his adventures with the loofah mitt and falafel back in 2004. Well, FINALLY, it has caught up with O’Reilly. Just like his former boss, Roger Ailes, the splotchy faced, self declared cultural warrior is out. Where will poor little Billy go now? The White House, as Trump’s new press secretary? We shudder and laugh at the thought.

This reminds us of a photo-toon we did back in 2007 which featured O’Reilly and , at that time, CNN Headline News host Glenn Beck (we think he’s a greeter at Walmart now), who made some rather unwelcome advances toward a female he was interviewing. Yes, we can just picture how a night out on the town with conservative super studs Glenn Beck and Bill O’Reilly might have gone. You can almost hear the strains of Haddaway’s What is Love in the background can’t you. 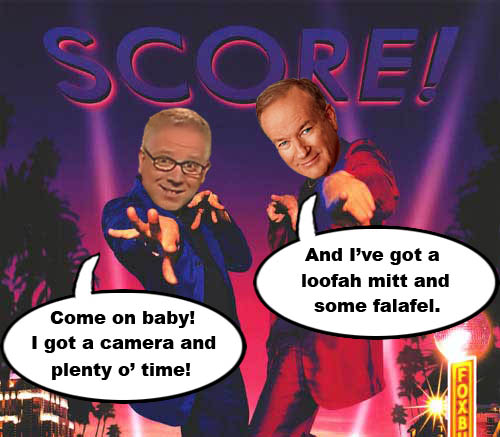 Conservative Super Studs, Glenn Beck and Bill O’Reilly, have announced that they’re going to make a new movie called A Night at the Foxbury, which is based on their wild, crazy, escapades wooing the opposite sex. This on the heels of Glenn Beck’s recent incident where, while discussing the topic of the naked American Idol photos, he made the following suggestive comment to USA Today’s Dina Sansing on CNN’s Headline News: “Dina, I’ve got some time and a camera. Why don’t you stop by?” But just like Ann Coulter, Beck was just joking, of course.