Senate Majority Leader and Mutant Turtle Boy, Mitch McConnell had the audacity to state that Americans will not tolerate the Democrats obstructing American CEO/Dictator Donald Trump’s picks for the Supreme Court, despite having obstructed President Obama’s pick for the Supreme Court for most of 2016. Then the Lord of Obstruction went on to say that Democrats should grow up and not obstruct Trump’s cabinet picks despite the Republicans doing exactly that in 2009 for Obama. New York Senator Chuck Schumer even posted McConnell’s letter to then Senate Majority leader Harry Reid that cabinet picks must meet certain standards.

So basically Mutant Turtle Boy doesn’t want to apply the same standards for Trump’s picks. Please keep in mind that the new American CEO/Dictator hasn’t even released his tax returns and the ethically challenged Republicans aren’t even going to press him to do it. Because you know…it’s okay when Republicans do it. 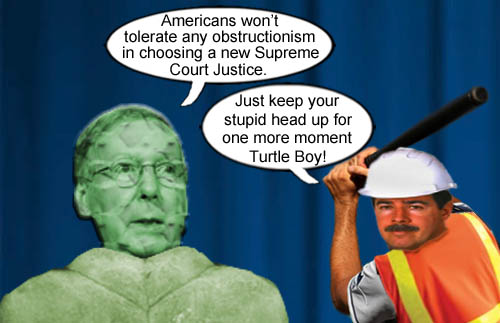