Congressman and Civil Rights icon John Lewis of Georgia recently passed away at the age of 80. Congressman Lewis was an exemplary citizen who selflessly served not only his district but the entire country. Lewis was part of the infamous Bloody Sunday protest back in 1965, when peaceful protesters, led by Lewis and Martin Luther King Jr. attempted to cross the Edmund Pettus Bridge in Selma, Alabama but were brutally beaten by law enforcement officials and racist provocateurs.

There is now a movement to rename the Edmund Pettus Bridge to the John Lewis Bridge. This seems like a no-brainer to us here at the Bucket. Edmund Pettus was a former Confederate Army officer who also was a grand dragon in the Ku Klux Klan. The people of Alabama can continue to embrace their racist, Confederate, KKK past or march into the 21st century and rename the bridge to honor John Lewis, who wanted peace and opportunity for all humans, no matter their race, creed or color.

The Stoner Who Would Be President

As if the joke that is Con-a-thon 2016 couldn’t get any stranger, the once respectable Chicago Tribune announced this past week that they’re going to endorse not Donald Trump… not Hillary Clinton… but Libertarian candidate and stoner extraordinaire, Gary ‘Dude’ Johnson. We’ve gained a little, tiny bit of respect lately for the Arizona Republic and the San Diego Tribune for breaking with tradition and endorsing the only sane choice for President, Democrat Hillary Clinton. But come on Chicago Tribune. This man had another ‘Aleppo’ moment last week on Chris Matthews when he couldn’t name a world leader. We think the people at the Trib may be ex-High Times employees and may be smoking the same thing as the ‘Dude’. 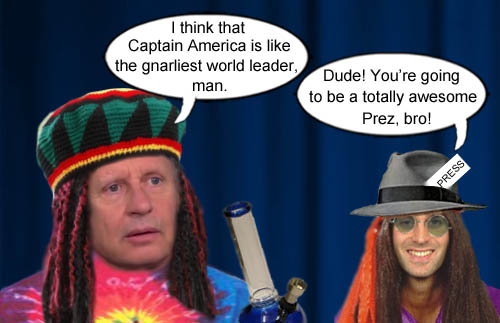 The stoners over at the Chicago Tribune think that Libertarian candidate Gary ‘Dude’ Johnson would be a totally awesome choice for President.