Here’s the last entry in our brief retrospective of journalism’s clown prince and go-to Donald Trump interviewer and ass kisser, Tucker Carlson. His latest hard hitting question of Donald Trump: “What do you do at the end of the day? What do you read? What do you watch?” Wow! What gutsy journalism! The funny thing is that Trump answered that he loves to read but doesn’t read much any more. And the books Trump recommends everybody reads? Why they’re about Donald Trump, of course.

But we’d like to remind everyone of one of Carlson’s more stunningly stupid comments way back in 2007. On his MSNBC show, Carlson stated that then presidential candidate Barack Obama, “seemed like kind of a wuss.” This coming from a man who regularly wore a bow tie and dressed like Steve Urkel until about 2006. Yes America; Tucker Carlson is not only journalism’s clown prince, but he’s also journalism’s manly man. For a partial list of Obama’s accomplishment’s see this post. One noteworthy item on the list: he eliminated the world’s #1 terrorist Osama Bin Laden. Not bad for a ‘wuss’, eh Carlson. 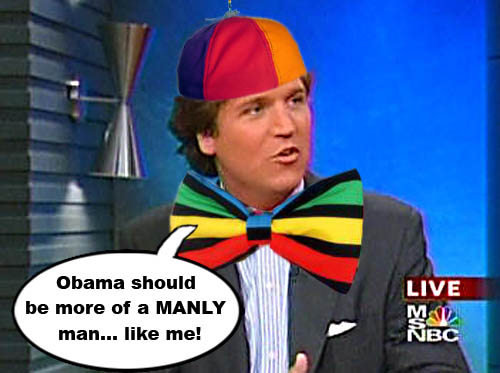 MSNBC talk show host and manly man tough guy, Tucker Carlson, recently stated that Barack Obama “seems like kind of a wuss.” This from the man, who until recently dressed like Steve Urkel.