As Barack Obama’s term as the 44th President of the United States winds down to it’s last days and the dawn of the Trump era of corrupt corporate fascism begins, we’d like to offer our thanks and appreciation to President Obama.

He ascended to office back in 2009 with howls of derision from crybaby Republicans and hopes that he would fail. America was stuck in the quagmires of Iraq and Afghanistan. The economy was reeling because of the failed policies of the Bush administration and the repeal of the Glass-Stegall act by both Bill Clinton and the Republicans. Despite bending over backwards to appease the crybaby Republicans, the GOP just wouldn’t do anything to support the President and that includes fighting tooth and nail to make sure that even the poorest Americans don’t have access to affordable healthcare. But Obamacare became a reality and millions now can actually see a doctor when they get sick. He also lessened our involvement in Iraq and Afghanistan and he actually eliminated America’s greatest threat, Osama Bin Laden, much to the chagrin of jealous Republicans. Please review our archives for more details of Republican obstructionism.

Obama achieved many accomplishments during his two terms in office. We’ll just list the top ten highlights in this post, but they’re listed in depth on other pages like this one (which lists 400). Washington Monthly lists 50 here. In summary, thank you Barack Obama: you made America great again. 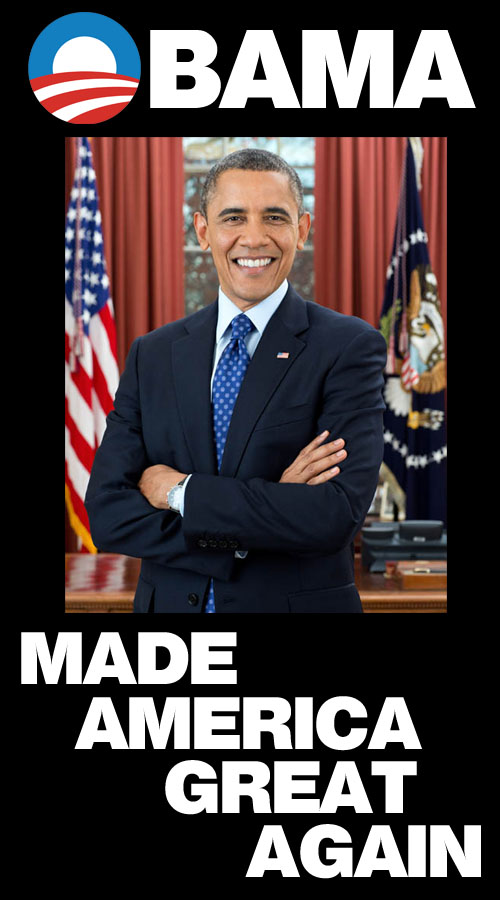