As usual, the Republican Fear and Noise Machine is in overdrive since Obama has boldly come out fighting after the election. Obama has pushed for keeping net neutrality, voting against the Keystone pipeline (it didn’t pass the Senate this past week), and the big news in the past week, an executive order for comprehensive immigration reform. The GOP is fit to be tied. Of course it doesn’t matter that a GOP investigative committee found no wrongdoing by the Obama administration in Benghazi. Speaker of the House, John Boehner (pronounced boner), had announced that they’ll pursue another investigation with a committee that he will select. How is a sane person to deal with these Republican shenanigans? We think the pet care world has an appropriate answer for dealing with the fearmongering, conservative Republican in your life. Just use the following tactic at Thanksgiving dinner if your Republican gets going on a rant. 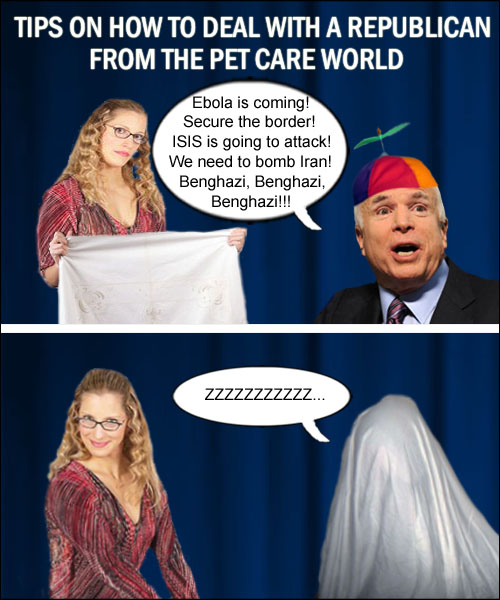 The pet care world provides an answer for dealing with the fearmongering, conservative Republican in your life.