It’s almost mid-December, which means that America’s self proclaimed ‘culture warrior’, Bill O’Reilly, is in the midst of his annual ranting about the so called ‘War on Christmas’. We’ve commented on O’Reilly before. He’s one of the neocons over at Fox News, a.k.a. The Republican Propaganda Network, so this ‘War on Christmas’ fits right in with the ‘journalism’ dished out on a daily basis there. Of course, O’Reilly conveniently ignores any facts which get in the way of his agenda, like fourth century christians declaring that christmas should be on December 25th because that’s when the pagans celebrated the winter solstice. Sorry folks; Jesus wasn’t born on christmas. But that doesn’t give us warm fuzzies, and if you’re religious it’s all about the warm fuzzies. O’Reilly has a cow because people say ‘Happy Holidays’ instead of ‘Merry Christmas’, yet the word holiday comes from the merging of two old English words which mean ‘holy day’. And yet after O’Reilly delivered performed a recent rant, Fox News showed a message which wished the audience ‘Happy Holidays’.

Here’s a photo-toon from our October 6, 2006 issue, which shows America’s favorite ‘culture warrior’ O’Reilly ready to slay all the evil, secular dragons who have the audacity to say ‘Happy Holidays’. 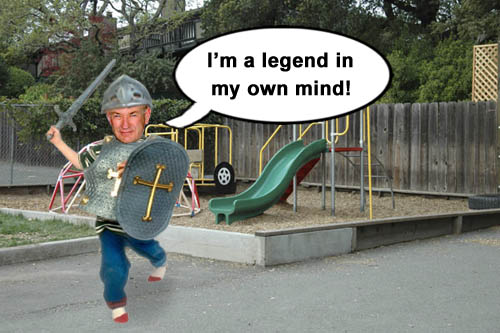 Fox News talk show host, Bill O'Reilly, whose only goal in life is to look out for you, has written a book, Culture Warrior, where he fancies himself not only as a protector of Christmas but also a defender of American culture. In the book, he names and analyzes his enemies so his loyal thinking impaired followers will know whom to hate.