The fallout from Con-a-thon 2012 continues with more Republicans and corporatists whining about the re-election of President Obama. Ranging from Papa John’s CEO stating that he’ll have to raise prices on his pizzas a whopping 14 cents to cover the costs of Obamacare to other captains of industry firing people rather than cut their own obscene salaries. To add insult to injury, huge department store chains have cut their workers hours and salaries and decided to open up their stores on Thanksgiving as well. So rather than do the whole wholesome, conservative family values thing and spend time with your family, spend time in the store fighting other people for unbelievable bargains.

What’s even more astonishing is that people showed up in droves to the stores on Thanksgiving. So now it looks like Black Thursday will replace Black Friday and probably Thanksgiving as the big event in November. And ‘culture warrior’ Bill O’Reilly blames atheists for the ‘War on Christmas’ and not the greedos in corporate America. 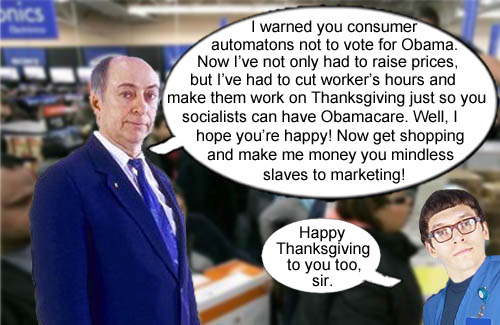 Billionaire President and CEO of Juggermart, Lawrence T. Juggers, explains the consequences of voting for President Obama to the faithful consumer automatons who frequent his stores.