The Supreme Court obstructionism continues and both of Arizona’s Senators are joining their crybaby Republican colleagues in blatantly avoiding their constitutional duty. We’ve ribbed repeatedly Arizona’s Senior Obstructionist, John McCain(here, here and here for starters). Yes, our ‘maverick’ Senator, who famously reached across the aisle to champion Campaign Finance Reform, only to vote against an amendment which would overturn the Supreme Court’s atrocious Citizens United ruling, which gives the well funded corporate elites of this country carte blanche to control elections, recently was quoted as saying ““I believe that we should wait until after the next election and let the American people pick the next president, and we should consider who the next president of the United States nominates.” This contrasts greatly to the old John McCain, who used to solidly support the Senate voting on Supreme Court nominations. What’s more, in 1993 and 1994, McCain voted to approve President Clinton’s Supreme Court appointments of Breyer and Ginsberg by saying “under our Constitution, it is the president’s call to make.” In addition, McCain, like several other Republicans, wholeheartedly approved Merrick Garland’s appointment to the Washington D.C appeals court as chief judge in 1997.

So what’s up with Mr. Maverick? We here at the Bucket think that Senator McCain’s best days are clearly far, far behind him. He’s up for reelection this year(he’s facing a stiff challenge from Democrat Ann Kirkpatrick and fellow Republican Kelli Ward) and this issue may decide if he retains his position. He’s seems to be acting more like a crotchety, old curmudgeon than a distinguished senator.  His dislike of Obama has unhinged him so much that he won’t even perform his constitutional duty. We’ve commented before here that many Republicans have said that if the current President was Republican, they’d approve the nomination. It’s clearly the Republicans who are playing politics. Ol’ Man McCain needs to join Sheriff Joe Arpaio and Helen Purcell and ride off into the Arizona sunset. 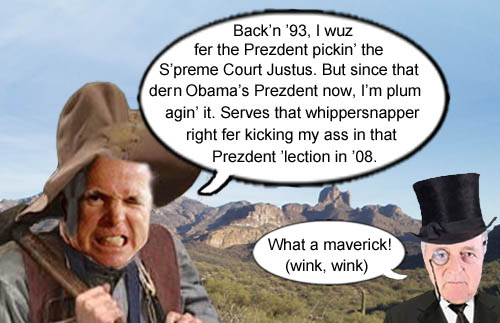 Crusty, old codger and Senator, John McCain, demonstrates his ‘maverick’ style by explaining why he supports obstructionism over solid, bipartisan statesmanship much to the delight of his plutocratic overlord.