Guess who’s reared his ugly head recently. That’s right: good ol’ Dubya. Since brother Jeb has started to rev up his campaign for Con-a-thon 2016, George W. Bush has stopped painting himself in the bath tub and emerged to help his brother gain the presidency in 2016. Of course, that means spinning the bejeezus out of his disastrous legacy as president. Dubya actually had the nerve to criticize President Obama on his handling of the situation in Iraq. And of course, Dubya has deluded himself into thinking that increasing the numbers of troops in Iraq (the Surge) helped stabilize the region when in fact the surge failed. It’s a sign of things to come in the next year and a half. The Republicans are going to being lying their asses off to try and make the Iraq War, Obama’s war. Make no mistake: the Iraq War was and will always be George W. Bush’s war.

Here’s a photo-toon from our November 29, 2007 issue, when Dubya was already trying to bullshit people on the debacle that was his presidency. 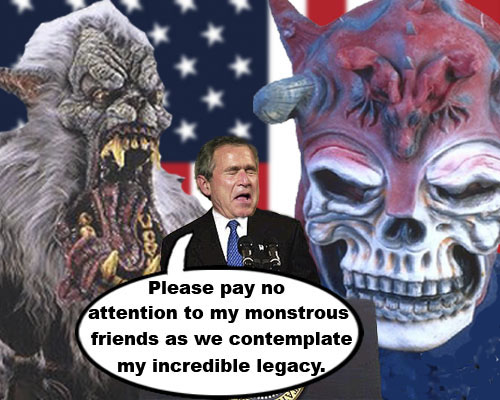 George W. Bush, flanked by his old friends the Deficit and the Iraq Occupation, has recently been trying to spin a positive legacy out of his disastrous tenure as President.