Have you ever noticed that you rarely see a conservative, christian Republican male not dressed in a suit and tie. Sure there have been exceptions: St. Ronald Reagan photo-oping himself as the Marlboro Man out on his California ranch; Dubya photo-oping himself riding around in his pick up truck, wearing a t-shirt, jeans and cowboy hat ‘clearing brush’ (because that’s what all manly men like to do on their vacations); and of course Spiff Romney photo-oping, wearing his blue denim button down shirt with the top button opened up just enough so we can see the top of his t-shirt (or it might have been his magic, Mormon undergarment). It’s no secret that many religious conservatives (not only christians) are repressed about sex and about their bodies. Some can’t even say the words penis or vagina without turning fifteen shades of crimson. Some even cover themselves up at all times…even in the hot tub???

Here’s a photo-toon from our April 11, 2004 issue just after Condoleezza Rice bamboozled the 9/11 commission, showing what kind of wanton antics happen when conservatives get their phreak on. Just don’t get your ties too wet guys. 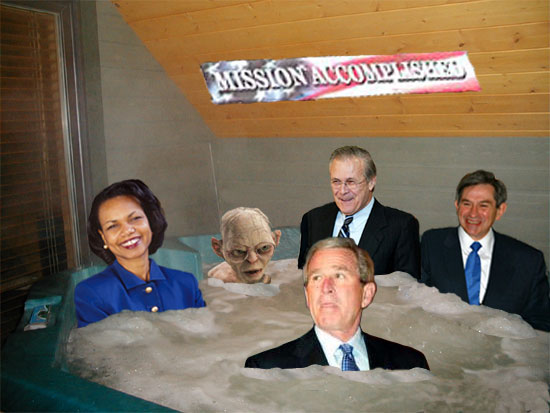 Condoleezza Rice celebrates her bamboozling of the 9/11 commission by relaxing in the hot tub, conservative style, with other members of the Bush Administration. From left: Rice, Dick Cheney, Donald Rumsfeld, Paul Wolfowitz. Front: President Bush.