The Grim Reaper Of ‘Success’

The Trump administration’s response to the coronavirus pandemic has received universal criticism from just everybody on planet Earth with the exception of Trump supporters and the GOP. In an odd and disturbing recent poll, a majority of Republicans are fine with the 180,000+ deaths from COVID-19. Just to recap for sane Americans: these people are the same Republicans who thought the 4 deaths from Benghazi in 2012 and the 2 deaths from the Ebola breakout in 2014 were cause for Obama to resign from office for gross negligence, but the 180,000+ deaths from COVID-19 under Trump are peachy keen and thus the Impeached CEO/Dictator and petulant man child is deserving of four more years in the White House.

As to further illuminate the insanity of this line of reasoning, Presidential adviser and modern day grim reaper Jared Kushner gave an absolutely chilling and aggravating interview where he crowed that the 180,000 deaths are an absolute success and that President Trump should be lauded for all he’s done. Folks, this is fascism and gaslighting that Joseph Goebbels would be proud of. We’re all hoping to wipe that perpetual, arrogant, smug smirk off of Kushner’s face on election day. He’s not only repulsive to look at, he’s repulsive to listen to. And if you’ve been brave enough to watch any clips of the insane RNC this past week, Kushner is as repulsive as everyone else in the Trump family circus. November 3rd can’t come quickly enough for us to vote these assholes out of office and hopefully into jail for their many ethical, criminal and moral violations.

Another Saddam photo-toon, this time from our November 13, 2006 issue. A certain Mr. Reaper pays a visit to the pillar of humanism to remind him of his grim prospects. 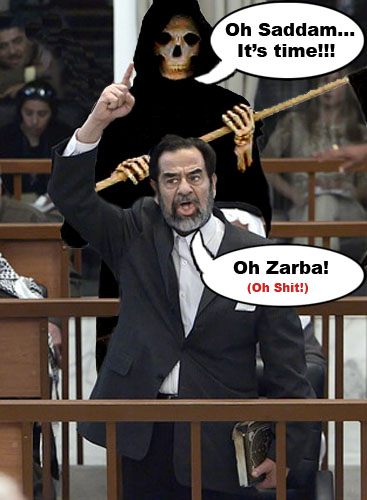 Saddam Hussein, who was sentenced to death last week in his trial in Iraq for crimes against humanity, has his tirade interrupted by a special visitor.