Another day, another embarrassment from the Donald Trump administration. This time it’s Donald Trump’s meeting with Germany’s Chancellor Angela Merkel. Germany has been one of America’s staunchest allies since the end of World War II and certainly since reunification of West Germany and East Germany in 1990. Germany is not only one of the strongest economies in the world, it has emerged as one of the strongest democracies. They’ve really gotten their act together in the 21st century so we’re fans of the die Deutscher here at the Bucket. Which is why, to us, Trump’s actions macht kein Sinn.

First of all Trump reiterated awkwardly his baseless claim that Obama wiretapped Trump Tower to a bewildered Merkel. Then he refuses to shake hands with her, although he claims to not have heard her request. Even if he didn’t hear her, his body language during the meeting was one of a petulant child refusing to eat his broccoli. He clearly wanted to be at his Mar-a-lago resort golfing rather than meeting with a powerful democratic world leader who is far more intelligent than he is. Every day, Trump produces one imbecilic act after another. His administration has fast become an embarrassment of embarrassments. Is it any wonder that his approval ratings are historically abysmal. It kind of makes us want to move to Deutschland. 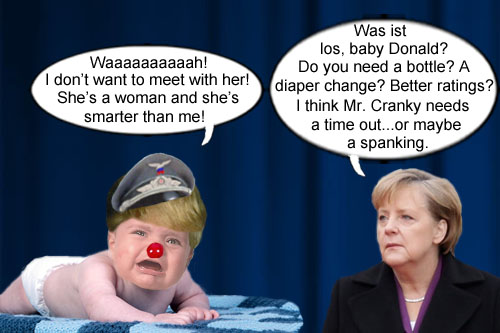 American CEO/Dictator and petulant child Donald Trump throws a temper tantrum because he has to meet with a world leader who is not only smarter than he is, but is also a woman: Germany’s Angela Merkel.