There have been a multitude of jokes about America’s CEO/Dictator Donald Trump’s offspring, especially his boys, Eric and Donald Jr. They are the epitome of spoiled rich kids. Who can forget their haunting pre-election photo with Ivanka where they channeled the Children of the Corn. Now, Donald Jr. is sweating his pompous ass off waiting for a possible indictment in the Mueller investigation and Eric continues making stupid comments, this time on Twitter like his good ol’ dad.

Much has also been said about their big game hunting in Africa and their poses with the dead animals that they slaughtered for no other reason than to prove what manly men they are. It’s this toxic masculinity (and other factors such as human over-population, pollution, and global warning among others)  that has led to half of animal species disappearing since the mid 20th century. We understand that many people in the world must hunt animals for food and basic survival. But these big game trophy hunters and especially poachers are pieces of dung. They hunt these beautiful animals just ‘for sport’; a sick thrill of watching a magnificent, unique animal die unnecessarily just so the human can feel like the master species of the planet.  Just click on the link above and take a look at the sick fucks beaming from ear to ear, posing with their kill. What the fuck!!! We need to be preserving these animals, not rushing them to extinction!

Quite frankly we’d love to see the tables turned, especially on the Donald’s progeny. Seeing Eric and Donald Jr.’s heads mounted on a tree by some lions on an African savanna would be sweet poetic justice. 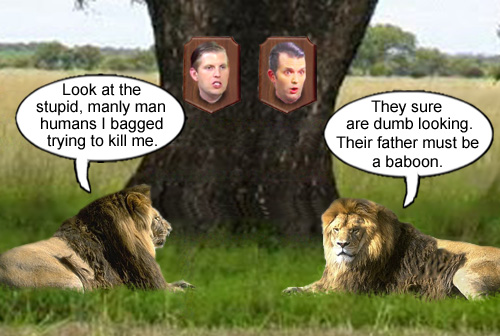 A couple of noble, African lions marvel at their latest trophies; a couple of spoiled rotten, rich, American brats trying to be manly men.