Those wacky conservatives over at Fox News, a.k.a, Republican Propaganda Network, have really become desperate lately. And rightly so. This week, two scientific papers have concluded that the glaciers in West Antarctica have now begun to irreversibly collapse. Of course, this bit of news contradicts everything Fox pushes concerning climate change. As a matter of fact, if you want accurate scientific news, Fox would be the last place you’d probably want to watch according to a recent analysis by the Union of Concerned Scientists. But that doesn’t stop those intrepid ‘journalists’ at Fox from spouting off their own business-and-industry-filtered theories concerning science. Why just last week, conservative guru, Charles Krauthammer, waxed poetic about how he thought that science was wrong, especially about climate change. Remember the Fox News mantra; if you have to think about it, it can’t possibly be true. 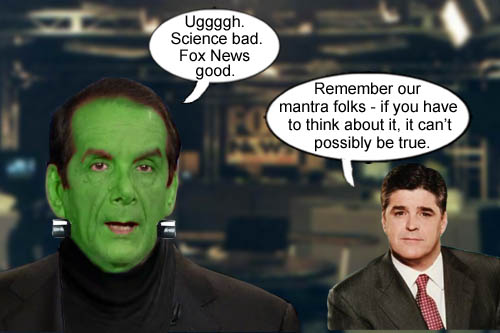