Rewind: A Trip To The Woodshed

We’ve got five months left in this joke of an election called Con-a-thon 2012. It’s amazing to us that so many of the so called ‘liberal’ media outlets are acting like all the problems we’re facing today are all Obama’s fault. It seems they’ve had a complete brain fart on the Bush administration. Let us not forgot that it was Dubya’s misadventures in Iraq and Afghanistan and the spending associated with those messes (not to mention the housing fiasco) that has put America in the pit it’s in today.

Here’s a photo-toon from our December 2, 2006 issue to remind us of the those glorious days back when the housing market was collapsing, the deficit was skyrocketing, and both wars had the earmarks of going on indefinitely. This is also when former Secretary of State James Baker recommended a complete withdrawal of troops from Iraq by 2008. Of course, Dubya didn’t want to do it. Well, someone with authority and a hickory switch had to give lil’ Dub-Dub a lil’ old-fashioned comeuppance. 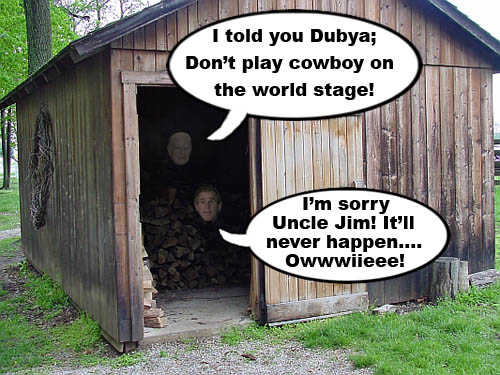