Nothing demonstrates the foolishness of the GOP’s obstructionism of President Obama’s Supreme Court nominee Merrick Garland more than Utah Senator Orrin ‘Booby’ Hatch’s response. This man said in 2010(in the opening that went to Elena Kagan) that he would be a “consensus nominee” and that there was “no question” he would be confirmed.  Even before President Obama revealed his choice recently, Hatch said “The president told me several times he’s going to name a moderate [to fill the court vacancy], but I don’t believe him. [Obama] could easily name Merrick Garland, who is a fine man. He probably won’t do that because this appointment is about the election. So I’m pretty sure he’ll name someone the [liberal Democratic base] wants.”

Well, President Obama named Garland as his nominee and now Hatch is backpedaling making all kinds of lame-ass excuses for obstructing the nomination. Here’s another weak one. Has this man no sense of decency? Former justice Sandra Day O’Connor has said that the Senate needs “get on with it” and moderate Maine Senator has also said as much. She said she even reread the Constitution just to make sure.

Surely this will reflect badly on the Republicans come election time, right? Well, one look at the Republican frontrunner will tell you; it’s not an April Fools Day prank. The Republicans have lost their frigging minds. 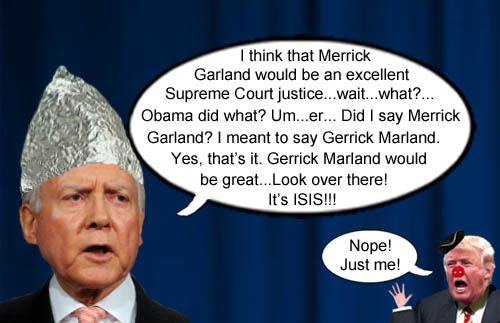 Utah Senator Orrin ‘Booby’ Hatch courageously weasels his way out of his earlier endorsement of Merrick Garland as the new Supreme Court justice nominee by boldly creating lame-ass excuses and other feeble distractions.