GOP presidential candidate and neo-Neanderthal , Rick “Google Me” Santorum, showed off his diplomatic skills Wednesday while campaigning in Puerto Rico, when he said that for Puerto Rico to become a state, they would have to embrace English as the primary language. Puerto Rico currently is a bilingual U.S. commonwealth and is voting in November on whether or not to pursue statehood. Spanish is also the primary language in the country because of it’s strong Spanish heritage and history. Of course, Santorum’s view is consistent with conservative Republican’s world view that everyone should speak English and Americans should only have to speak English everywhere they go, despite the fact that the majority of people in the Western Hemisphere speak Spanish.  His viewpoint reminds us of when Archie Bunker tried to speak Spanish on an episode of that classic 70’s sitcom, All in the Family. Pues, creemos que Santorum es un pendejo grande! 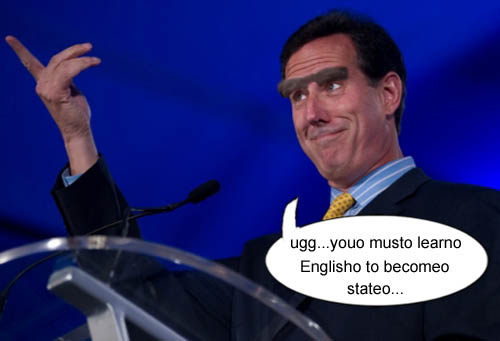 GOP candidate Rick 'Google Me' Santorum impresses the bilingual crowds in Puerto Rico with his command of the Spanish language.