In the Beginning, There Was BS

The evangelical christians have sure been showing their true ignorance lately with Pat Robertson and Michele Bachmann proclaiming that the east coast hurricanes and earthquakes are signs from God. Bachmann later recanted saying she was just jesting and that she has a fantastic sense of humor (well that statement made us howl with laughter). But what cracks us up here at the Bucket is religious conservatives’, especially GOP Presidential candidate Rick Perry, insistence that evolution is “just a theory” and that creationism should be taught in school on an equal footing with evolution. Of course they ignore that the Bible is a first century book of mythology and has tons of holes in it but we guess that’s just what’s called ‘faith’. Even Pope John Paul II said that evolution was “more than just a hypothesis.” But we like Biologist Richard Dawkins’ response to Rick Perry the best. Here’s the link.

Here’s one of our favorite photo-toons from our June 2, 2007 issue commemorating the opening of that bastion of ‘intelligent design’, the Creation Museum. 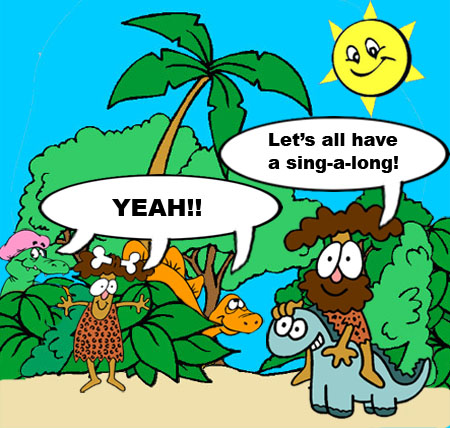 The Creation Museum, based on the teachings of the book of Genesis in the Bible, opened recently in Petersburg, Kentucky and contains such thought provoking, scientifically accurate displays as this one which depicts humans and dinosaurs co-existing peacefully in a sun-kissed, peachy keen world.