It Was This Big

Con-a-thon 2012 Republican front runner, Herman Cain, author of plan 999 from outer space, has had a bad couple weeks. Several women have come forward with allegations of sexual harassment by the former pizza magnate. Of course, Cain, Boss Limhogg and all the GOP blowhards from Fox News have not only denied all charges but have launched attacks against the victims. Did he sexually harass these women? We don’t know, but it sure is interesting watching Mr. Cain come up with explanations. 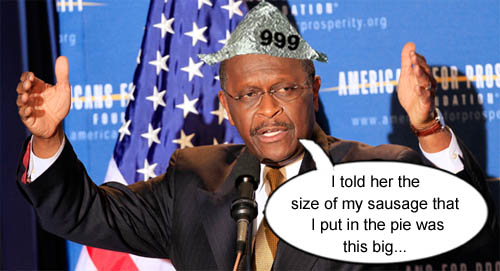 GOP candidate Herman Cain announces that a recent allegation of sexual harassment was just a misunderstanding and that he was just explaining to one of his many female admirers how he once made a pizza at a Republican fundraiser.