In case it wasn’t clear after the Citizens United v. F.E.C decision in 2010, last week’s McCutcheon v. F.E.C decision has made it abundantly clear to all Americans; our democracy has transformed itself into an oligarchy where democracy exists only if you have money…and lots of it. This latest decision, which removes donation limits, was split 5-4, with all the compassionate conservative Republicans on the bench voting to give control of the country to those poor, underrepresented plutocrats, billionaire CEOs and job creators. So to summarize: the corporate lackeys on the bench have made it possible for more corporate lackeys in congress. And they can do this because, thanks to Citizens United, corporations are people, too.  America: For the Corporation, By the Corporation. 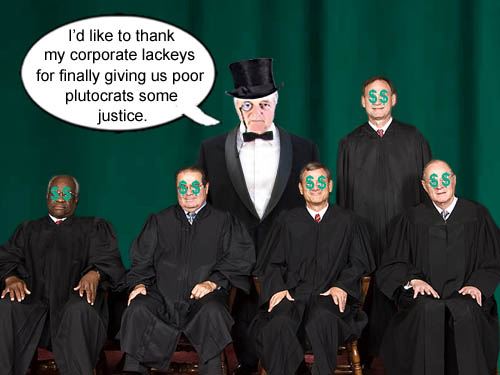 Plutocrats everywhere are rejoicing now that their corporate lackeys on the Supreme Court have finally given them a voice in the running of America.