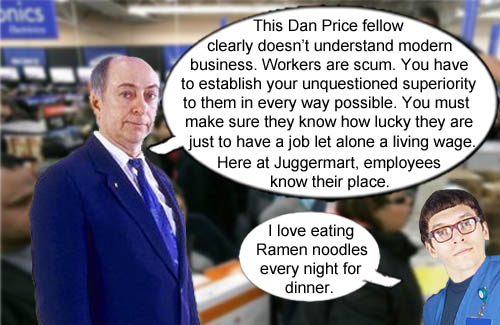 Our Corporate BS retrospective continues…This article is from our very first issue back on May 19, 2003. It’s amazing how some things remain the same in the ol’ Corporate States of America. Remember folks… it’s all about the profits.

CEO Mike Montgomery of MicroDinks, Inc. says this weeks layoff of 25% of the work force was a ‘move of strength’. “This move will position us positively in the market place and enable us to be mean and lean for the future,” said Montgomery at a news conference.

“Move of strength my ass!” said laid off technician Jerry Nelson. “I’ve worked for MicroDinks for ten years and this is the thanks I get! I’ve got three small kids, a sick parent, a mortgage and two car payments. That two week severance check ain’t going to cover crap. And my health coverage is gone! I can’t afford those COBRA payments. They’re expensive as hell!  I’m screwed!”

John Germann, a laid off computer programmer said, “I don’t know what I’m going to do. The job market sucks. I’ve looked on monsterspaz.com, nerdorama.com and geeksforhire.com. There are just no technical jobs to be found.”

Montgomery insisted that the move was necessary in order for MicroDinks to make a profit for the upcoming fiscal year and keep stock prices high to appease stockholders.

“Well hot damn,” added Nelson. “That warms the cockles of my heart knowing that ol’ Mikey won’t have to sell his Porsche or his Hummer. He even gets to keep his five homes. Greedy Frigging Bastard!”

“Maybe I could get a job as his pool boy,” said Germann.