The college football bowl season is in full swing here in America. Yes, it seems like every poedunk town or city has a poedunk bowl game sponsored by a poedunk company. Do we really need the TaxSlayer Bowl in Jacksonville Florida or the Foster Farms Bowl in Santa Clara California? Really? What’s more, losing teams are going to bowl games now. Congratulations on your awful 5-7 season; you still get to go to a bowl game! Talk about promoting mediocrity. Oh that’s right…we forgot. College football is a business now, not a sport. It’s all about the money. Gee, do we sound jaded?

Since we’re talking about the gawdawful stupidity of collegiate and professional sports, it’s time for another edition of Helmet Hilarity. We think the funniest thing about football and collegiate sports are some of the school mascots. For instance, the Banana Slugs of the University of California at Santa Cruz or the Artichokes of Scottsdale Community College evoke a hilarious image, especially if you saw a big banana slug or an artichoke depicted on a football player’s helmet. So in this vein we present our feature, Helmet Hilarity, featuring the helmets of obscure collegiate teams and their unconventional, zany mascots.

Today, we present the helmet of the Elmo Hopkins Medical School Fightin’ Ebolas. Everyone’s heard of Johns Hopkins University. Well, Elmo Hopkins was Johns’ less successful third cousin twice removed, who was a ‘doctor’ in the eastern Kentucky hills and founded a ‘medical school’ back in the early 1900s to promote his ‘health elixirs’. Back in 2000, the administrators decided to update their name and mascot to something scarier, more modern and more to do with medicine (or as they put it, ‘mediciniy sounding’). It had been the Elmo Hopkins Moonshiners with their mascot XXX, a big ceramic jug of ‘health elixir’. The powers that be decided against making a fearsome, deadly animal like a bear, lion or tiger their mascot. They also decided against intimidating, murderous humans like warriors, giants or raiders. They even said no to natural, lethal forces like hurricanes, cyclones and tornadoes. Instead they chose the smallest, deadliest creature around; the ebola virus. When you think about it, it’s a wonder why more colleges don’t feature more viruses, bacteria and germs on their helmet. The ebola virus is a good example. It’s so frightening, the Republicans used the threat of it coming to America to win the House and Senate in 2014. We know, we wouldn’t want to be facing a fightin’ ebola across the line of scrimmage. 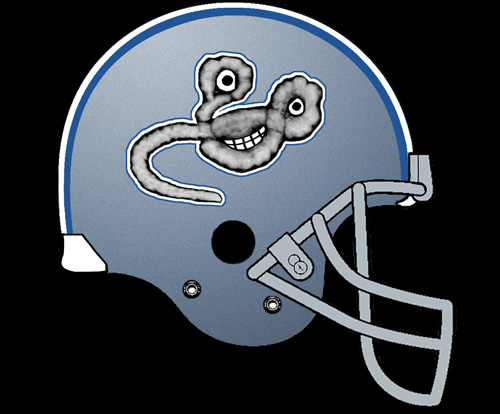