Continuing with our zany zealot retrospective…we finally switch to the biggest pain in the world’s rear, Osama Bin Laden, who like Saddam Hussein, was a monster created by the United States. He was one of the Afghan freedom fighters against the Soviet occupation that were much heralded by then President Ronald Reagan. The mastermind of the 9/11 attacks and other terrorist attacks around the globe, and the leader of the terrorist group Al-Qaeda hid successfully in Pakistan, our supposed ally, for ten years until President Barack Obama ordered the attack that killed him last year. BTW, we think President Barack Obama has a right to tout the attack. If Dubya can don an enhanced flight suit, land on aircraft carrier and use 9/11 repeatedly for political purposes for his re-election in 2004, then we have no problem with Obama doing the same.

Here’s a photo-toon from our December 5, 2004 issue, when Osama Bin Laden was supposedly hiding in the Tora Bora region in eastern Afghanistan. 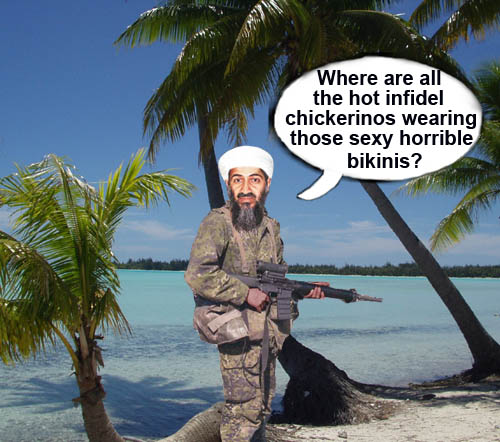