Occupy Wall Street has gone world wide and is gaining momentum. The 99% now have demonstrations going strong in every major world city from Phoenix to Toronto to Brussels to Berlin to Madrid to Auckland, New Zealand.  And what does the media do. They’re still asking questions like “What do these people want?”, “How can they be taken seriously without leadership?”,  and saying things like “They’re just lazy and don’t want to work”. Well, what do expect from the mouthpieces for those poor, oppressed, unfortunate %1ers.

But finally, we’re starting to hear from those hapless, persecuted, underrepresented 1%ers. Hopefully, justice will prevail and bank, insurance and oil companies will continue making billions and not have to pay taxes. We wouldn’t want their executives to go without their yachts, luxury car fleets and caviar. Egads! How could those poor wretches survive? 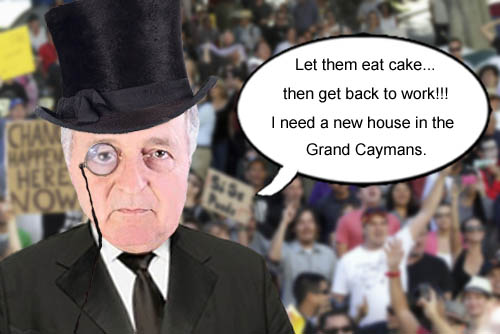